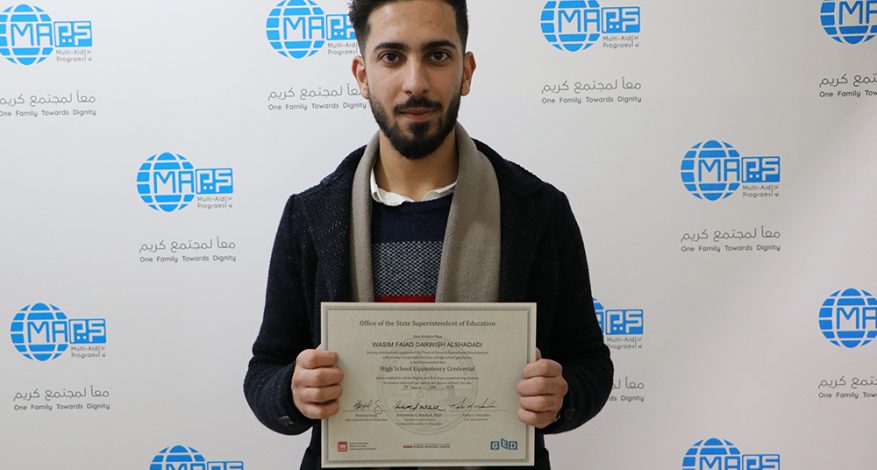 “The moment you give up, you will destroy yourself, so do your best to reach your goal” these are the words that Waseem Al Sheddadi believes in when he started to move on after he was forced to leave his high school due to war’s circumstances in Syria.
He fled to Lebanon in 2014, but his hope and resolve are still in his heart and he aimed to continue his studies in asylum country.
As soon as he reach Lebanon, he started to learn English language from his home alone for six months, then he registered in an English course for two months in an institute.

After that, he got the chance to register in a preparatory course in English language provided by Southern New Hampshire university that may nominated him to have an academic scholarship, but the obstacle was that he didn’t have a high school certificate.
MAPS noticed waseem’s -22 years old youth- passion, interest, ambition and desire to continue his studies, he was one of MAPS beneficiaries In vocational and 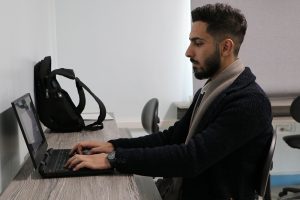 innovative courses like web design and graphic design course.
Since he was distinct, MAPS asked GED organization to accept Waseem in a scholarship to study an American high school, MAPS also helped him by letting him attend 6 months preparatory course provided by Southern New Hampshire university in English language, science and math.
“I wouldn’t be able to have this chance and to continue my studying, unless MAPS was here, I really thank MAPS and its great staff who helped me and supported me individually” Waseem said.

He proved that he deserved this trust, he was able to study GED high school with distinction and started to study Art of Communication specialization.
During that period, Waseem biggest problem was to balance between work and study, but he believes that you have to sacrifice your time and your health sometimes to acquire knowledge and to achieve a remarkable degree in a foreign country, the one should be dedicated in his work and study as well.
“Decision’s makers are people who are well educated and they are the only one who can make the real change, so don’t give up” this is Waseem’s message he would like to send it to all refugees.