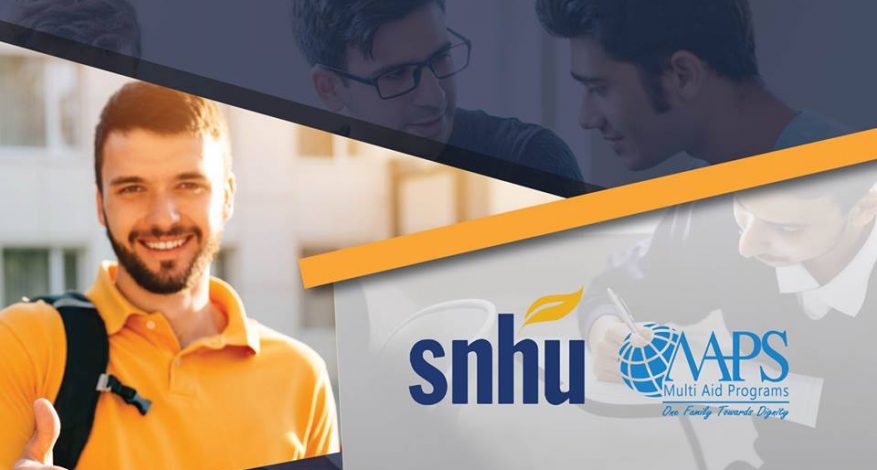 The firm belief in the capacity of Syrian refugees to prove themselves in the construction and alteration and allowing them access to the higher education, realizing their rightful aspirations and their self-realization in straitened financial circumstances that they faced in Lebanon, MAPs has concluded an agreement with Southern New Hampshire University (SNHU) in the United State of America to offer online scholarships for Syrian refugees and Lebanese citizens for a term of four years. Scholarships divide into two phases, the first one is an associate’s degree, which is equivalent to the institute’s certificate with 120 credits. The education system of the university offered the possibility to finish this stage during time period ranging from 7 months to maximum two years. The second phase of the scholarship is a bachelor’s degree with 120 credits, which is complementary to the first phase and required to the successful passing of the first stage.

The first phase of the scholarship initiated almost one year ago. Five student were accepted in the pilot stage after they received online training courses in MAPs. Their scholarship started last autumn. The second stage of scholarship started early March after 20 students received intensive courses in English and social communication skills at the headquarters of the organization three months ago.

SNHU launched the Global Education Movement (GEM) which is a large-scale and long-term initiative to award accredited graduate degrees free of charge from the USA for the most marginalized population and refugees in the world, including Syrian refugees in Lebanon. The platform will reach up to 50,000 educators, which is currently serving about 1000 students by five platforms (Lebanon, Kenya, Rwanda, Malawi and South Africa).

SNHU is a nonprofit and regionally accredited university with an 80-year history of providing high quality education to students online and on campus in the USA. The institution offers affordable, accessible degree programs to over 90,000 students online.