The goal of this campaign is to restore hope among Syrian children in North-West Syria, by establishing the first-ever Innovation Education Center in Albab city, This project supports the reconstruction of Syria’s destroyed education system in a fragile region and fosters a much needed safe space for vulnerable children. 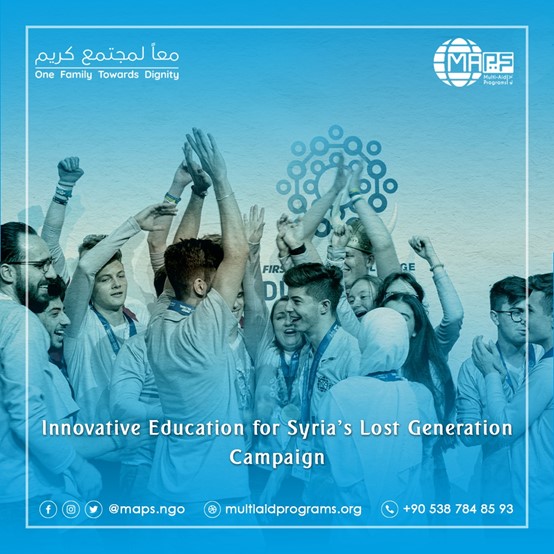 Residents of North-West Syria endure a range of daily challenges and suffer from increasingly poor living conditions. Our aim is to provide a glimpse of hope for the future generations and to support children’s development. This project is carried out by Multi-Aid Programs (MAPs), a Syrian-led humanitarian organization which has 8 years of experience and success, providing innovative STEM education, including the development of an internationally award winning Robotics Team.

Today, you CAN support the grassroot work of MAPs by helping us introduce this highly impactful STEM curriculum to Syrian children in North-West Syria, where the educational system has been destroyed due to years of war and turmoil. Your donation will go directly to help 2,000 Syrian children between 9-14 age-old,

those children are just like Alaa who after leaving her homeland Syria left everything behind, her house, family, and school. She started to adapt with the new life, but she lost again her beloved mom and her temporary home “the tent”. Your donation will not only support children like her but also will support their indirect psychosocial support through the development of confidence and new social networks. There’s a fire that burns people, but it cannot burn the hopes”, says Alaa.

With your generous support, Multi-Aid Programs (MAPs), a Syrian-led non-governmental organization working across Lebanon, Turkey and North-West of Syria, can provide the innovative and technological education for Syrian children, restoring hope and building futures.

Our vision for the future

This project aims to raise the level of education in terms of quality in the deprived regions of North-West Syria, where there are large numbers of displaced people from various regions of Syria, by introducing technology, science, languages, arts, morals and values into the education system and opening a series of qualitative model schools in North-West Syria.

Implementing quality and innovative education models in North-West Syria will significantly improve the education system and has the potential to enhance the stability and settlement of the local population in the region.

The MAPs family thanks you for your support!

Stationary for to be used for 1 student

Education materials to be used for 3 students (group)

To provide a production tool for one class of 15

Advanced robotic kits for one class