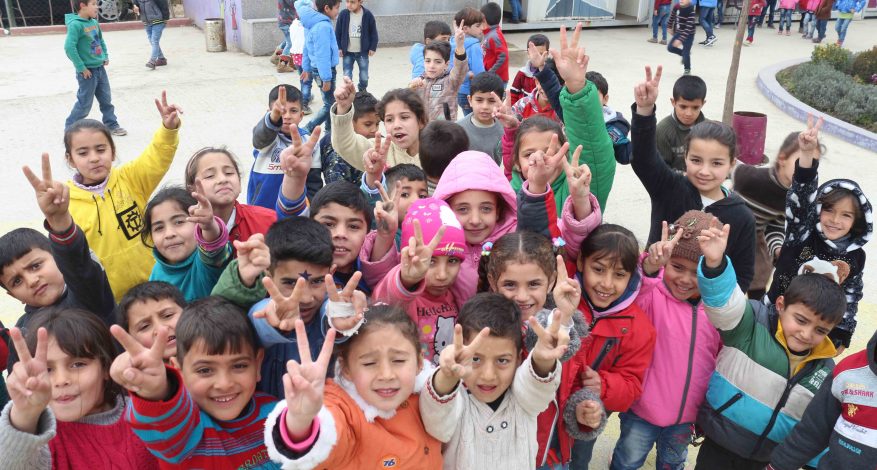 Al-Amal Teaching Centers project is implemented in Bekaa  governorate in Lebanon, which is close to the Syrian borders. The majority of Syrian refugees in Lebanon might be found in its villages and suburbs, in addition to Leban-Nord governorate. These villages lack the basic infrastructure and are in need of several types of assistance, including public and private schools. School aged Syrian refugee children in Lebanon are 477.034 (Source: UNHCR, August, 2015), while the total number of enrolled in -Lebanese public schools, including Palestinians, is 155.195   in the academic year 2015-2016. (Source: Ministry of Education and Higher Education (MEHE), November, 2015). This means that less than 32.5 % of Syrian refugee children can get formal education. While the MEHE’s Accelerated Learning Program (ALP) is making a difference, it has a limited target enrollment of 90,000 children (MEHE, Reaching All Children with Education II), and therefore cannot meet the needs of all refugee children.

In Bekaa Governorate alone, 56.4% of the 371,809 registered Syrian refugees are children (UNHCR, Dec 31, 2015). Lebanese public schools in Bekaa, and in in other Lebanese governorates, cannot meet the capacity needed to enroll all Syrian children who need education. Only 238 public schools are operating as second-shift for the school year 2015-2016 (Source: MEHE, November, 2015)

The lack of their daily basic needs make Syrian refugees unable to register their children in private schools, or even in public schools where transportation fees are required. These fees can range from USD 30-40 per month per child. The raising number of children out of schools tells that serious cultural and financial consequences will be there, which makes the issue of education a must.

WFP announced that about 50% of Syrians can be considered vulnerable and can barely afford their basic needs (July, 2015). The majority of Syrian refugees are living in settlements and camps, 1435 informal settlements were identified by UNHCR. A remarkable percentage of refugees living in distant settlements and camps, due to their difficult circumstances, don’t consider education as priority. Most of the time, they are unable to pay transportation fees  to send their children to formal schools, unable to pay tuition fees for private schools (which can range from USD 6,00 – 5,000 per year per child in Bekaa), and sometimes don’t even find a school in the nearby. That is why the MAPs Education Program in Lebanon undertook the responsibility of bringing the schools/ teaching centres to their settlements.

“Syrian refugee households had on average 2-3 children in school age (3-17 years old). Two thirds of them were not receiving any education and 44% had not attended school for at least one year. The main reasons for not attending school continue to be tuition fees and school supplies that were considered too expensive. Akkar had the highest percentage of children attending school while the Bekaa Valley had the lowest percentage of school attendance amongst school aged children.”  ( Source: VASyR, WFP, 2014)

Classes, trainings, uniforms, stationary, and all activities are provided at no cost to the students. The centers are located close to the students, so no transportation is needed.

The below classes are taught for each class:

Several trainings are delivered to the staff with partnership with several local and international stakeholders in Bekaa.

Summary about the project:

This project will meet the need for non-formal primary education by implementing the Lebanese curriculum with intensive English classes in “Al-Amal Teaching Centers in Bekaa informal settlements for Syrian refugees. Nine teaching centers are run by MAPs with 3500 total estimated number of beneficiaries for the academic year 2016-2017.